Cutting up a pig on a Sunday morning is always great fun (saying it like we do it all the time….ha!) 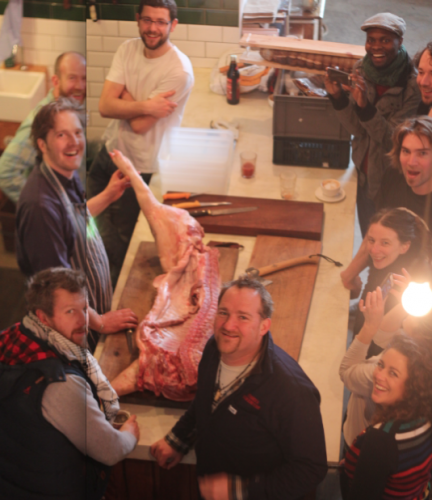 We finally managed to find a day to get Ted, Ivan and Fingal up from Cork to show us how to be as clever as possible with all the trimmings off a lovely free range pig. A little shaky from the night before (The Queens, Queers & Tarts night, which was a bag load of fun) the bloody marys and a whopper feed of moroccan style eggs helped us on the way. 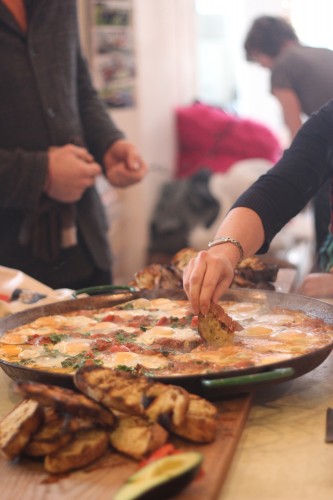 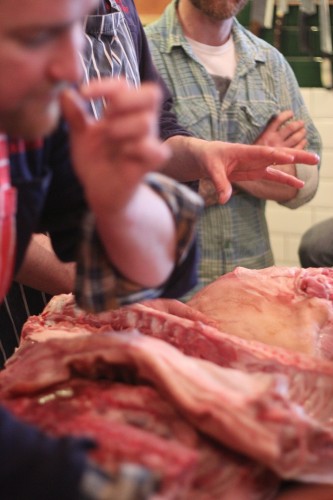 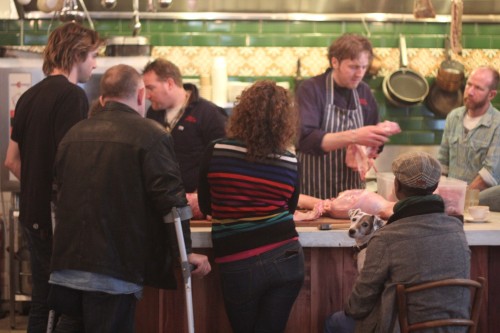 Seeing where all the different cuts were coming from made it a lot easier to think of things to do with them. So the Leg went back to Gubbeen with Fingal to get brined and we roasted it up with a simple honey and dijon glaze for a ploughmans plate. 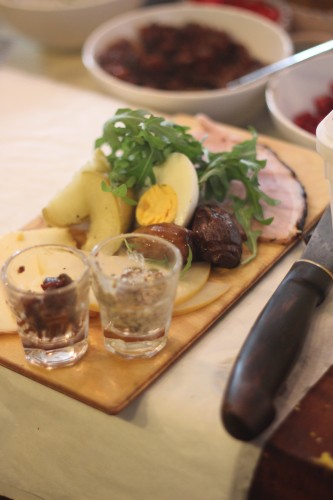 The shoulder cuts went into a delicious normandy  apple and walnut casserole. 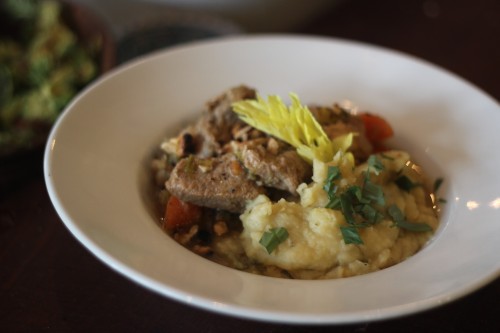 The trimmings went into our first try of house-made sausage meat, which quickly turned into disaster when we realized our grinder head was way too fine and the meat was coming out like cotton wool. Just about saved by Jasper who ended up cutting the rest of the dice by hand. Sumac, pink peppercorn and cumin sausage rolls. 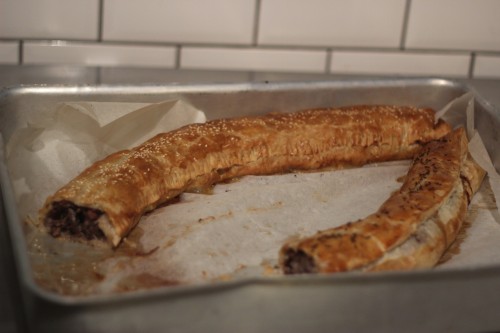 The same sumac, pink peppercorn and cumin rub went on the ribs, with some added brown sugar. 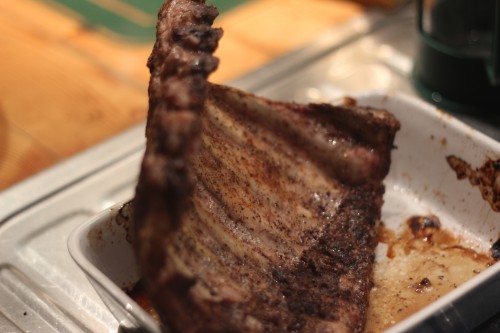 And the fillet , loin and belly were hung for pancetta, coppa and cured spiced fillet. These were not the most successful, we didn’t get our temperatures and humidity right and probably a whole load of other things, but it was good to try. We’ll definitely be more stringent on following Fingal’s instructions for these next time.

Ali Kirby has been holding stage in the fumbally for the last few months.

The ‘Him’ of ‘Him & Her’ from the Undertow exhibition in Ormston Gallery 2011. 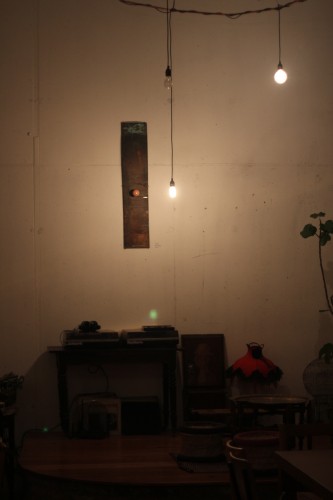 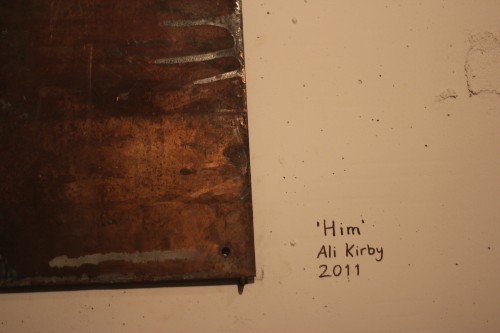 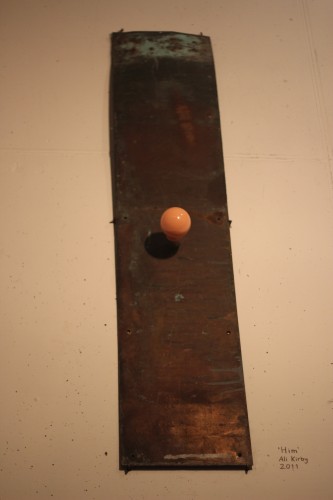 This Is How We Fly are an incredible collective of musicians. For those who are unfamiliar with them, expect beautiful arrangements for fiddle, clarinet, synths, percussion and toes. Ten toes and a pair of tap shoes are part and parcel of the band’s percussion!!

As with the End Is Nigh gig back in December, there will be a plate of food included in the ticket price of €20.

Tuesday 30th April, doors 7.30pm. Tickets on sale from the Fumbally only. 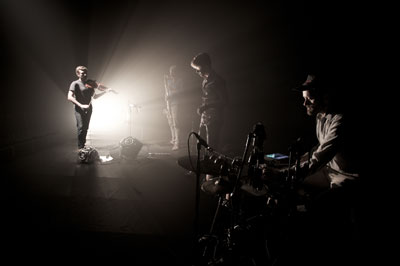 This is another ‘Happenings’ gig with Peter O Brien.

Turkish cuisine is a wonderful thing. But like so many aspects of eating, it can be distinctly circumstantial.

While traveling in Turkey food highlights included; picking a pomegranate straight from the tree for breakfast in a forgotten valley on the southern coast, drinking a warm sour yoghurt drink and actually thinking it was good and sitting on a sunny pavement in Istanbul tucking into one of the most delectable of heavenly food experiences – Bal Kaymak.

The turks do love their honey and as with all honey you can find varying degrees of floral  and woodland tones depending on where it originates. On this occasion I was lucky enough to get a slice off a comb, something that is far more common over there than it would be here. The Kaymak was fresh (as it always is) and unctuously smooth. Kaymak is only good for 24 hours and is therefore made every morning, formed into roulade shaped cylinders and slices are scraped off onto the plate. Accompanied by some bread and the ubiquitous glass of sugary tea, watching the world of Cucurcuma go by on a warm sunny morning in early October, it was so simple, so good. 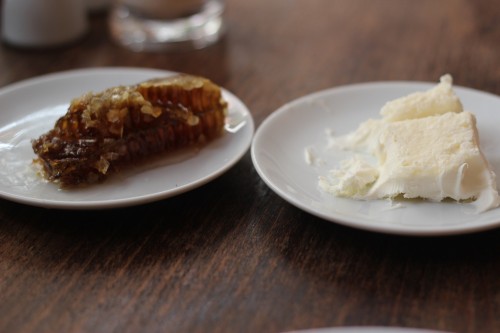 So with a slight tip of the cap to the Turks we have come up with an Irish version Cáis & Mil, which on a rainy day in Dublin, could take you to any sunny pavement in Istanbul in a heartbeat. 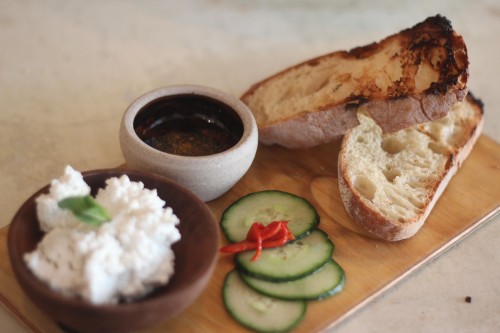